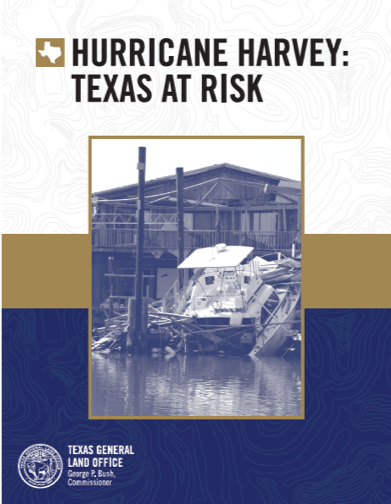 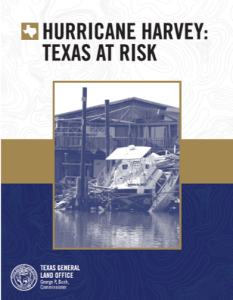 On the first anniversary of Hurricane Harvey’s destruction, the Texas General Land Office (GLO) released its Hurricane Harvey Report, Hurricane Harvey: Texas At Risk on August 24, 2018.  Authored by Andrew Natsios, an executive professor at the Texas A&M University Bush School and director of the Scowcroft Institute of International Affairs, the report makes 18 policy recommendations at all levels of government.  In this blog post, we boil down the report’s 49 pages, focusing mostly on aspects that have direct  implications for risk assessments, business resiliency and business continuity/disaster preparedness (and also homes).

The report includes a very informative summary of Texas’ proclivity for natural disasters, and also summarizes the damage caused by Harvey.  Some aspects are covered in our blog post Be Prepared for the 2018 Hurricane Season.  As the GLO report proclaims, “Texas is extraordinarily vulnerable to high-damage natural disasters.”:

So it seems, based on the above, Texas is probably most at risk for flooding and storm surge during August and September.

Why is Texas so Vulnerable to Disasters?

The report lists four reasons why Texas is so vulnerable to disasters: 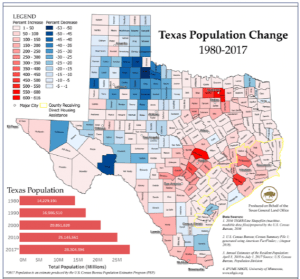 All of this is true, but the Geophysical Fluid Dynamics Laboratory (which works cooperatively in the National Oceanic and Atmospheric Administration) has concluded:

GLO mentions downtown Houston is only about 50 feet above sea level (and as mentioned above, it also notes that Houston is sinking).  But it bewilderingly neglects to mention Houston’s (and other areas at or slightly above sea level) vulnerability to rising sea levels caused by climate change.  Nor does it mention the potential effect of increased hurricanes intensity on Texas.

Extremely interesting obfuscation aside, the report explains that the U.S. government and Texas state government have been partly to blame for population growth in disaster-prone areas.  Citing a July 2018 study by the Kinder Institute for Urban Research at Rice University, the report notes that “U.S. government and Texas policies have unintentionally encouraged people to ignore future hurricane and flooding risk by providing government bailouts after each disaster event without insisting on housing resiliency and fortification efforts to protect homes and businesses in the future.” (more on this later)

GLO notes that Hurricane Harvey was the most economically destructive hurricane in Texas history. 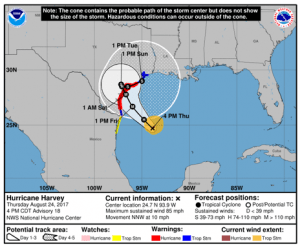 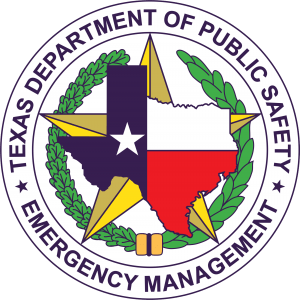 The most interesting lessons learned from the report relate to an interesting phenomenon that plagues humans.  It has implications for planning related to security, resilience, risk management, business continuity, and disaster preparedness.  We tend to focus on immediate, short-term fixes rather than invest in longer term remedies — even when research reveals the efficacy of the latter.

GLO states that Texas, through its Department of Emergency Management (TDEM), has a well-run immediate emergency response system — probably one of the best in the U.S.  However, the state’s longer term recovery system leaves much to be desired.  Recovery requires skill sets different from those required for emergency response; the former requires experts such as economists and urban planners.

Unfortunately, the Texas state government (and probably most state governments ) lacks these subject matter experts.  But private industry clearly has this disaster mitigation expertise.  According to the report, an example of the collateral damage from this state government shortfall is the continuing vulnerability of the petrochemical industry in southeast Texas.

The report explains that TDEM does have a recovery mission in accordance with Texas law, but only approximately 20% of its staff (and thus a majority of its efforts and funding) is focused on recovery.  Fault also lies at the federal level.  GLO cites a July 2018 report by the Kinder Institute, which asserts that FEMA spends only 5% of its budget on mitigating the effects of disasters.  The U.S. Congress is partly to blame, “focusing limited funds on disaster response rather than on prevention and mitigation.”  The report states that rigorous academic research has shown that for every single dollar invested in disaster mitigation, fortification of buildings, and resilience, four dollars are saved in the reduced need for hurricane response and recovery funding.

It notes that the private sector has considerable expertise and technology in disaster recovery, mitigation, and resilience that would be of great use to state and local recovery managers.

Establish a Permanent Training Center for Disaster Mitigation and Recovery

Texas also needs a disaster training center focused not on immediate response, but rather on disaster mitigation and recovery, according to the report.  The center would train both public sector (e.g., building inspectors, code enforcers) and the private sector (builders, etc.). Training would include construction technologies, urban and rural planning, and disaster vulnerability.

The report asserts that flooding in Texas would be “substantially” reduced if the Texas state government took over flood control planning of the state river system from the U.S. Army Corps of Engineers (The report does not mention the lawsuits that Fort Bend County and also homeowners and businesses in Harris County have filed against the Corps of Engineers due to its hurricane-related operations of the aging Addicks and Barker dams).  “There is no agency that is tasked with and empowered to coordinate and direct flood control efforts.”  Texas needs a more centralized system.

Additionally, the aforementioned population growth in the state has occurred near various rivers.  The report notes there are almost 3,000 miles of rivers and 61 reservoirs. However, there is no one overriding authority to coordinate flood control efforts or to conduct flood water measurement.

One misperception that directly affects homeowners, home buyers, and businesses relates to flood maps.  The report clarifies that FEMA-sponsored flood zone maps “…are not completely scientifically based; they are actually insurance rating tools, not flood probability prediction tools.”  This misunderstanding has had dire consequence by presumably most of the public who use these maps.  The report uses the example of Harris County, where “55% of the homes which flooded during Hurricane Harvey were outside FEMA’s flood zone maps.”  (And remember that 83% of the homes impacted by Hurricane Harvey did not have flood insurance).

One of the most surprising examples of the aforementioned, disproportionate focus on immediate response at the expense of recovery is the Texas building construction code.  It is 15 years out of date for residential construction. Citing the Insurance Institute for Business and Home Safety, GLO reinforces that Texas receives one of the lowest ratings of East Coast and Gulf Coast states for its building code.  “Only Delaware, Mississippi, and Alabama received lower ratings than Texas.”

This amazing short-sightedness has resulted in Texans building and rebuilding with outdated building codes to face future hurricanes.  The issue is pervasive; there is a misperception among officials and homeowners alike that homes cannot be built to withstand a category 4 hurricane.  Compounding this startling state of affairs is the aforementioned population growth in Texas — presumably this means more homes and business are still being built using outdated Texas codes.

Layering on this fixable problem with the Texas building code is the federal Stafford Act, which FEMA lawyers have interpreted as not allowing FEMA funds to be used to improve housing; rebuilds can’t improve on housing conditions that existed prior to the hurricane damage — regardless of the inadequacy of the codes under which the housing was originally built. GLO’s Recommendation 14 seeks to remedy this:

“The federal government must expand the definition of what is permissible for reconstruction funding within FEMA programs, and the GLO must investigate and consider using new technologies for housing construction which are less expensive, more resilient, and can be implemented faster than traditional housing construction techniques.”

Long known to critical infrastructure and security risk management experts alike, the report states that “the safety of the Texas Coast is crucial for the economic well-being of Texas and the country.” 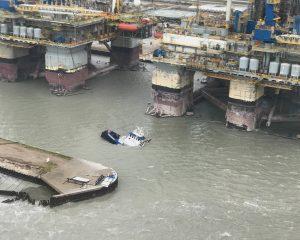 A barrier system to protect all this critical infrastructure will cost approximately $20 billion.  The report does not provide an estimate on when such a barrier would be built, but construction probably will not begin until after the Corps of Engineers completes its study in 2021.  Not mentioned in the report is the intense (and surprising) opposition to this barrier system due to its projected cost.

Another study on storm risk management, known as the Sabine to Galveston Study, focuses on the area from Brazoria County to Orange County (southeast Texas).  “The proposed construction area is of considerable national and economic security concerns”: 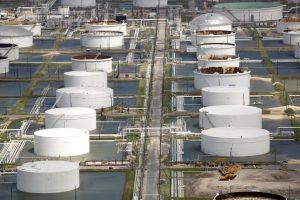 The status of this study is unclear.  After stating the USACE finished its report (which recommended a 23-mile levee system in unprotected Orange County) in August 2017, the report then asserts “Currently, the GLO and the USACE are in the middle of this long delayed study, which did not begin in earnest until November 2015: this will address the needs of the Houston/Galveston Bay area.” Interestingly, the report verbatim uses this statement to also describe the status of the Coastal Barrier System study.  Regardless, these two studies mentioned in the GLO report highlight the continuing vulnerabilities of Texas-based critical infrastructure to significant meteorological hazards.

Overall, despite the very strange omission of the impact of climate change on past (however minor) and future hurricane disasters in Texas, the Texas General Land Office’s Hurricane Harvey Report is worthwhile reading for home and business owners; potential homeowners; and company risk managers, business continuity personnel, and security departments.

Our enterprise security risk assessments always consider natural hazard risks such as hurricanes and other risks never considered by our clients. Call us to discuss a risk assessment at 202-389-6200 or 703-934-2034, or complete our contact form.  You can also schedule a free phone consult below: